Forts in the PHL

Forts in the PHL

Before it became Fort Santiago, It was a kingdom of a Muslim chieftain Rajah Sulaiman, and when the Spanish conqueror (conquistador) Martin de Goiti came and defeated the native settlers, they built the Fuerza de Santiago (Fort Santiago) in 1571 on its site. This was the place where Dr. Jose Rizal was detained prior to his execution by the Spaniards at the Luneta in 1898. The building where he was imprisoned is now the Rizal Shrine. Some of his works and the gadgets he used as a doctor are on display inside.

In defense against pirates and raiders of the sultans of Mindanao and Jolo and upon the requests of the Jesuit missionaries and Bishop Fray Pedro of Cebu prompted the Spanish governor Don Juan Cerezo Salamanca to approve the building of a stone fort in the year 1635. The fort was originally called "El Real Fuerza de San Jose".

3.) Fort San Pedro, Cebu City - Fuerza de San Pedro is a military defence structure, built by Spanish and indigenous Cebuano labourers under the command of Spanishconquistador, Miguel López de Legazpi and the Spanish Government in Cebu. It is located in the area now called Plaza Indepedencia, in the Pier Area of Cebu City, Philippines.

The smallest, oldest triangular bastion fort in the country was built in 1738 to repel Muslim raiders. In turn, it served as a stronghold for Filipinorevolutionaries near the end of the 19th century. This served as the nucleus of the first Spanish settlement in the Philippines. 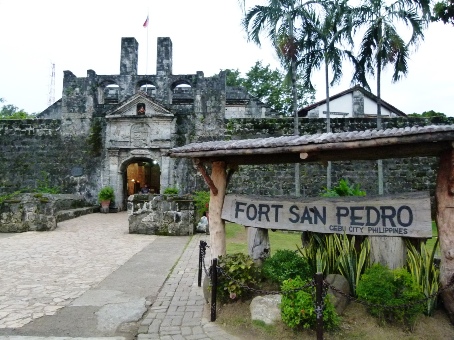 4.) Cuyo Fort - was completed in 1683 (the National Historical Institute marker on the site gives a date of “about 1680”) and served as the town center of Cuyo and a primary means of defence against enemies from the sea, usually Moros. The fort houses a church on one side and a convent on the opposite side (which is now located perpendicular to the church). In 1827, a belltower was added on one of the corners, or bastions, of the fort. 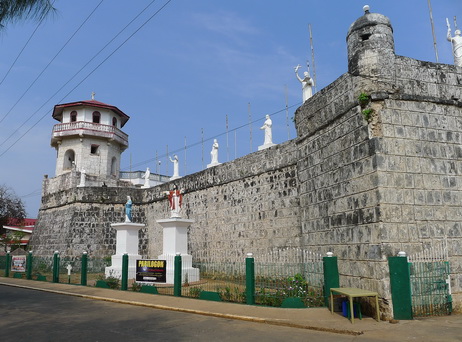 5.) San Diego De Alcala Fortress Recognized by the National Historical Commission as a national treasure in 1981, this fortress was constructed by the Spaniards under the leadership of Franciscan Father Francisco Coste. It was erected to help guard the town against sea pirates. The fortress is located in Gumaca, Quezon. There used to be an exisitng tunnel between said fortress and the San Diego de Alcala Church, now a cathedral.