Only in the Philippines: 5 Strange Cemeteries, 5 Cool Things to Do There

Only in the Philippines: 5 Strange Cemeteries, 5 Cool Things to Do There

The beauty of the Philippines goes beyond the grave that even our burial sites have become travel destinations all year round. Our forefathers have been brought to rest in the most beautiful spots -- from under the sea, to a surfing break, and even to the mountaintops.

Check out these unique cemeteries, from Luzon to Mindanao, and travel our country with the dead.

1) Hang out at the Hanging Coffins of Sagada, Mountain Province.

For thousands of years, the Ifugao of the Cordilleras have practiced the tradition of burying their dead in hanging coffins, each nailed to the sides of the cliff in Echo Valley. It is believed that hanging the coffins in such an elevated place will bring the physical bodies closer to their ancestral spirits.

In their practice, the body of the dead is first bound with rattan and vines and then placed on a wooden chair facing the main door of the house to allow their relatives to pay respects. After a vigil for a number of days, the corpse is secured into a fetal position, the legs pushed up towards the chin. It is tied with rattan and vines and fitted into a coffin measuring only about a meter in length.

VIEW: MT. PROVINCE: 5 Must-Visit Restos That Make Sagada Cooler Than It Already Is 2) Bury all the nega vibes at the Cemetery of Negativism in Baguio City, Benguet.

Found in Camp John Hay, the Cemetery of Negativism (aka "The Lost Cemetery" or "Pet Cemetery") is not really a burial site but a symbolic place for getting rid of "man's greatest self-imposed infliction." *

It was designed by then Base Commander Major John Hightower. The epitaphs use word puns to make the visitors laugh and, hopefully, make them leave behind all the pessimism and negativities.

Why Didn't I? Lived Wondering Why, Died for No Reason

Kant B. Done, Died Before He Started

VIEW: BAGUIO: 9 Ways to Take Your Lover to Cloud 9

VIEW: BENGUET: From Laguna to Cordillera: A Mountaineer’s Tale 3) Live out the life of a revolutionary at the Nagcarlan Underground Cemetery in Laguna.

Declared a National Historical Landmark in 1973, the Nagcarlan Underground Cemetery -- in all its cold glory -- was both the resting place of the Spanish and elite and a secret rendezvous of the group that planned to overturn it. Its oldest tomb was dated 1886 while last interment was in 1982.

Unlike most Spanish cemeteries, it was built away from the town's center since its underground chamber was reserved only for Spanish friars, prominent town citizens, and elite Catholic families. Established in 1845, the site was supervised by Fr. Vicente Velloc.

By 1896, the cemetery became a meeting place of the Katipunan through the command of Pedro Paterno and Gen. Severino Taiño. The strategies for the historic Pact of Biak-na-Bato happened in the said crypt. It also served as the hideout of the Filipino soldiers and guerillas during World War II.

4) Ride the waves with the dead in Siargao.

Right in front of a great reef break in Siargao, known for its barreling waves, is the General Luna Cemetery. But don't fret! That doesn't mean that this surfing spot, called "Cemetery," is deadly. It's just a coincidence that the town's public cemetery is by the beach.

Or is it? After all, this is a remote location.

5) Dive into the underworld at the Sunken Cemetery in Camiguin.

But don't forget to swim back up!

As an island formed by a series of volcanic eruptions, it is no wonder that most of the sites in Camiguin are either driven under the sea or broken down into rubbles. The town cemetery is one of them and only a huge cross erected in the 1980s has survived the drop into the underworld when Mt. Vulcan Daan erupted in 1871.

Visitors can go to unsubmerged spot by a quick boat ride and even go up the ominous structure. From the top (or even just from the bottom of the cross if you're afraid heights) is a panoramic view of Mt. Hibok-Hibok.

The best time to visit is early in the afternoon while the water is still shallow enough for viewing the tombstones from the side of the boat. Or you can always go snorkeling or scuba diving for a more intimate encounter...with the dead.

VIEW: CAMIGUIN: What is a Camiguin Sunset Made of? Which cemetery did you visit last All Souls' Day? Was it soulful enough?

The Bamboo Hut Worth 1.7 Million Pesos

The Snake Masseurs of Cebu: Dare Yourself to a Python Massage! The 4-Kilo Burger of Ilocandia

The Sexy & Controversial Island of Catanduanes 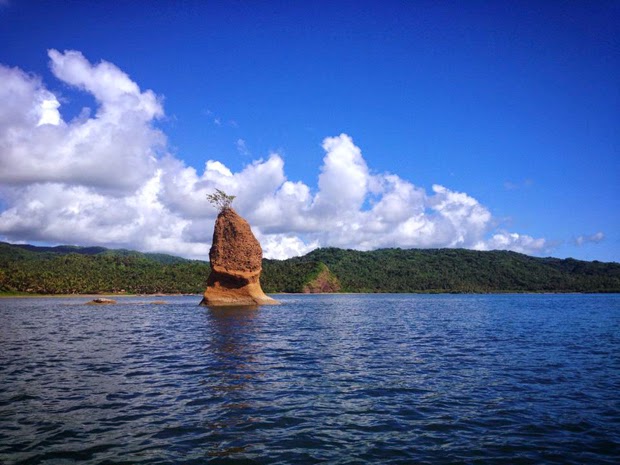 The Frozen Waves of Aklan The Sleeping Dinosaur of Davao

The Only City Park Where You Can Commune with 20,000 Birds

Monument to the Philippines' National Hero Marked With a Swastika