Skip to content
The church of San Joaquin is a Roman Catholic parish that was built during the Spanish era in the late 1800’s. It is the main church of the municipality located in Poblacion, San Joaquin, 5024 Iloilo. 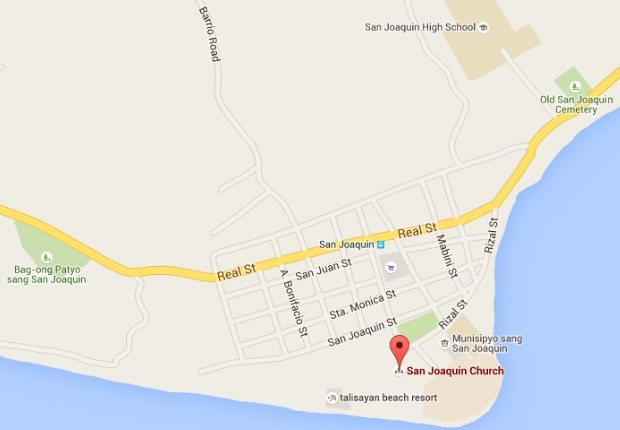 READ: Possibly One of Asia’s Most Beautiful Cemeteries: The Camposanto de San Joaquin

The San Joaquin Church was built starting 1859 and was completed in 1869. The construction was under the supervision of Spanish Friar Thomas Santaren, the town’s parish priest in 1855-1866.

The church was named after San Joaquin or St. Joachim. His wife is St. Anne. They were believed to be the parents of the Blessed Virgin Mary.

The church was built from the resources taken from the shorelines of the area and from the nearby town called Igbaras. The resources were mostly limestone and sea corals. But, what makes the church unique and widely known to Ilonggos? It’s the intricately designed frontage of the church.

The front wall of the church honors the Spanish army’s triumph over the Moors, known as the Battle of Tetouan, through an artwork.

The final battle of the Spanish-Moroccan War took place in February 1861. Upon hearing the great news of the Spanish victory, Fr. Santaren who was the parish priest and at the same time overseeing the construction of the church, ordered the Filipino and Chinese workers to craft a beautiful bas-relief version of the battle. The bas-relief mural Rendicion de Tetuan features military scenes and depicts the Spanish Army of Africa vanquishing the Moroccan Army.

The mural was placed at the large pediment of the church. Some believed that the mural is sort of a tribute of Fr. Santaren to his father who was one of the soldiers in the Spanish army during the Battle of Tetouan. The unusual design at the façade of the church, Rendicion de Tetuan, became a symbol of good (and its victory) versus evil for the people of San Joaquin.

The artwork has also become proof the people’s creativity, persistence and hard work of San Joaquin, Iloilo. In September 1977, the church was declared a national shrine. San Joaquin Church was also proclaimed by the National Historical Institute in November 2001 as one of the Cultural Heritage Churches of the Philippines.

From Iloilo City, you can take a jeepney bound for San Joaquin or a bus going to Antique. Fare is around Php50-60. If you opt to ride a jeepney, go to the Terminal Market near Robinsons Place Mall or ride a San Joaquin jeepney from Molo.

Wed Jun 1 , 2022
1.) Vjandep Pastel – “VJ”-Virgilio Jose, “AND” “EP”-Eleanor Popera or VjANDEP is best known for its filled buns called “pastels”. Hailed as the “Pride of Camiguin”, its famous product is now one of the most sought after goodies and pasalubong treats. 2.) SLERS Chicharon – is Cagayan de Oro’s Favorite snack item. Made from […]