The Church of Our Lady of the Immaculate Conception in Baclayon is considered to be one of the oldest churches in the Philippines. It is one of the best preserved Jesuit build churches in the region, although in the 19th century, the Augustinian Recollects added a modern facade and a number of stone buildings that now surround the church.

The first Spanish missionaries or doctrineros in the region, Fr. Juan de Torres and Fr. Gabriel Sanchez, first settled in Baclayon in 1595. Shortly after their arrival, a visita was erected on the spot. 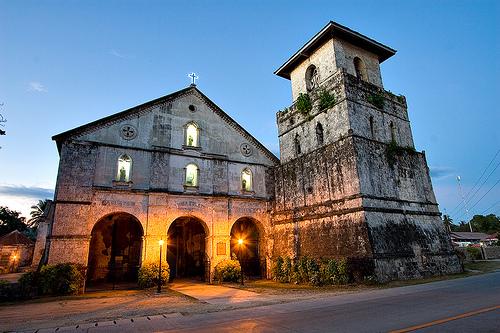 Although Baclayon was the first seat of the Spanish Jesuit missionaries, fear of Moro marauders soon forced them to move their headquarters more inland, to Loboc. Only in 1717, Baclayon became a parish, and construction of a new church commenced. Some 200 native forced laborers constructed the church from coral stones, which they took from the sea, cut into square blocks, and piled on to each other. They used bamboo to move and lift the stones in position, and used the white of a million eggs as to cement them together. The current building was completed in 1727. The church obtained a large bell in 1835. In the Baclayon church is a dungeon, which was used to punish natives who violated the rules of the Roman Catholic church.

October 15, 2013 Bohol was jolted by a 7.2 magnitude earthquake which is equivalent to "32 Hiroshima Bomb according to Philippine Institute of Volcanology and Seismology (PHILVOCS.) Unfortunately some of the prime tourist destinations in Bohol collapsed and one of which is the 400 year old Baclayon Church.

(the image of Mama Mary was left unharmed during the quake)

National Commission for Culture and the Arts (NCCA) Atty. Trixie Angeles expressed “Right now wala pa kaming assessment. All we know of the damages is based on the pictures lang. We can't say with finality the extent of that damage,”

In Bohol, Strange, Supernatural Logs From The Sea

5 PH Spots Made More Beautiful By Proud Albayana & Miss U...