Ibajay (pronounced “i-ba-háy”) is the custodian of Aklan’s living heritage, anchored on the strength of its army of ancients. 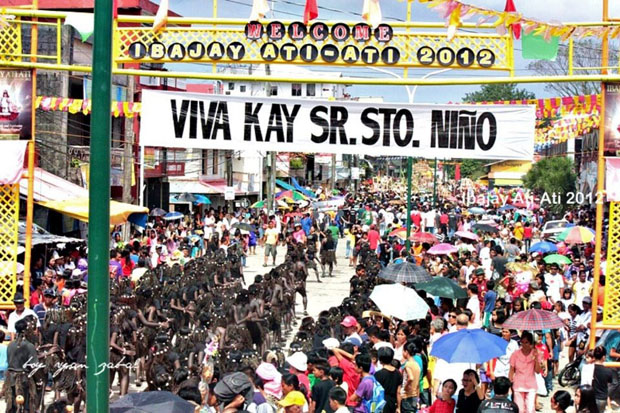 This force is led by the merrymakers and devotees of the Ati-ati Festival, the town’s version of the Kalibo Ati-atihan, and which is purportedly older and more authentic than its more famous sibling.

The hundreds of adults and children covered in soot from head to toe, dancing and skipping to the beat of drums, are but today’s avatars of the ancient revelers, caretakers of a tradition that has remained unbothered by modernization.

The mangrove trees of the Katunggan it Ibajay make for another invincible, if silent, battalion. While the Bakhawan Eco-Park in Kalibo is an inspiring reforestation project, Ibajay’s Katunggan is a preserved forest that has remarkably stood tall against the inroads of civilization, thanks to the efforts of the local people.

The 44-hectare site is one of the country’s most diverse mangrove forests, having 28 out of the 35 mangrove species.

Walking through the park on the elevated bamboo footpath is both a hearty exercise and educational experience. The way is lined with informative posters that serve as visual guides on the wet season birds and fiddler crabs that call the forest their home.

It’s good fun, too—the occasional thick stem or branch impedes your path and enlivens the walk, and you’ll need to crouch low, hug the tree, or step over to pass through. Think of it as a friendly game between limbs, yours and the tree’s.

The prize of the thirty-minute trek is the Katunggan’s main attraction, a great bungalon tree (Avicennia rumphiana). Standing at the end of the footpath, the sentinel is said to be at least 200 years old.

To be in the presence of such an old being is to breathe rarefied air, and standing in front of this bungalon is no exception.

Joining the ranks of Ibajaynon heritage warriors are the craftsmen and women who sustain the vigor of the town’s pottery and bamboo industries. A couple of roadside shops are found along the national highway to Boracay/Caticlan.

Speaking of thoroughfares, those familiar with the road from Kalibo to Caticlan (Boracay) will remember the double bridge crossing the Ibajay River as it pours onto the sea. Amble along the antique, pedestrian-only bridge, with your view of the sea and sunset being framed by the trusses of the steel bridge that runs parallel to your path.

On that newer bridge, tourist buses and vans rush to their destination, but on your bridge, there’s no reason to hurry. Tarry on, tarry on.

And speaking of crossing bodies of water, Ibajay is the birthplace of a distinguished Filipino in history who was renowed for his work on bridges. Alejandro Melchor (1900-1947) was a civil engineer, mathematician, and educator who sat as President Manuel Quezon’s Secretary of National Defense.

But Melchor’s chief claim to fame was designing the pontoon bridges used by the U.S. Army during the Second World War. As some quarters would say, his work contributed much to winning the war for the Allied Forces.

His birthplace (and its “marker”) might pale in comparison to the stately building named after him in UP Diliman (Melchor Hall, home to the UP College of Engineering). But there’s a certain joy in being able to “discover” this off-the-beaten-path landmark, in having a unique photo-op there, and more importantly, in paying homage to an inspiring Filipino.

Now, the sustenance of all of these, Ibajay’s legion, is the water. There’s the Ibajay River, which is separate from the Aklan River that flows through Kalibo. Then there are the waterfalls, one of which is Snibaa Falls, a wispy veil of white that can be reached after a short mountain hike. Replenish yourself with its cold waters, especially after a day’s worth of exploring.

Then as now, Ibajay’s bodies of water give life to this old town that in turn nourishes its history as much as it nurtures its present.

(All photos, unless otherwise indicated, were taken by the author.)

Where in the World is Ibajay?

The town is located midway between two of the country’s busiest airports—the Kalibo International Airport in Aklan’s capital, and Caticlan Airport which services Boracay Island. All major Philippine airlines fly to both airports many times a day. With Ibajay found along the national highway connecting both airports, it should be a breeze to drop by.

(Text adapted from the original version, written by the same author and with contributions from Khiara Kimpo, which appeared in the now-defunct Side Trip travel magazine, January-February 2013 issue. Many thanks to Plaridel M. Solidum (councilor & chairman of the Ibajay tourism committee at the time of the tour), Reynante Panaligan of Ibajay’s tourism office, and Josephine Gelito, Katunggan it Ibajay caretaker; and to Roselle Quimpo Ruiz and the members of her group, namely Josefel M. Enrique, Concepcion P. Labindao, and Antero Al Inac Regno.)

Thu Jul 8 , 2021
1. Diplomat Hotel – This former seminary before being developed into a hotel, is considered one of the most haunted hotels in the world. Strange noises and infamous headless apparitions are reported to be seen in this now abandoned hotel on top of the Dominican hill. Locals who live near the […]