If the Philippines as a whole has been called a paradise of 7,107 islands, then its South Central Mindanao region is a paradise within a paradise.

We can even say that it’s the “12th Paradise.” Region 12, also known as “Soccsksargen,” is composed of the provinces of South Cotabato, (North) Cotabato, Sultan Kudarat, Sarangani, and the cities of General Santos, Cotabato, Koronadal, Kidapawan, and Tacurong.

The Department of Tourism – Region 12 recently launched its tourism promotional drive in another region, Western Visayas, in the cities of Iloilo and Bacolod.

“The launch of the region’s new image will put to the fore its cultural, adventure, and natural attractions which are largely unexplored,” said DOT Regional Director Nita Nelly Dillera. 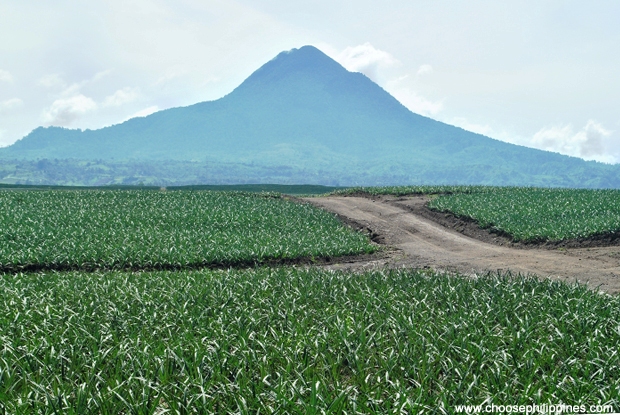 Mt Matutum and pineapple farms in Tupi; photo courtesy of Department of Tourism – Region 12
The event in Iloilo last March 21-23, 2014 was a selling mission and a travel exhibit for the tourism stakeholders of South Central Mindanao. It was also an opportunity for businesses to match with their counterparts in Western Visayas.

The exhibit features the inaul of Cotabato City, the tinalak of Lake Sebu’s T’boli tribe, the tasty tuna and processed food from the “tuna capital” of General Santos City, and the tropical fruits from Cotabato and South Cotabato provinces.

Venado Lake at Mt Apo National Park; photo courtesy of Department of Tourism – Region 12
To promote inter-regional travel and tap into the growing middle class of the two cities whose ancestors had migrated to Mindanao, DOT-12 decided to launch the road show in Iloilo before proceeding to Bacolod to harness Negros Occidental’s booming market.

Touted as the “Boracay of Mindanao.”

Can be accessed via Cotabato province.

Voted among the Philippines’ top 10 emerging destinations, which is the domain of the colorful T’boli tribe. You can also glide atop its Seven Waterfalls via the 1.1-kilometer, 180-meter-high, two-line zipline, the tallest in Southeast Asia.

The region’s gateway is General Santos City, the country’s “tuna capital” since the 1970s because of its rich trove of deep sea fish. Air and sea connections link between Iloilo and GenSan have been established to promote trade and travel between the two major urban centers.

Other Emerging Spots in Region 12

Your Guide to the Giant Lantern Festival, Christmas Capital of the Philippines

Wed Jun 1 , 2022
Paskong Pinoy is highlighted by the parol — all bright and colorful, symbolizing the Filipino’s undying spirit of hope and love for merriment and festivities. One city in the northern Philippines exemplifies this best. Delightful variants of Parul Sampernandu (San Fernando Christmas Lanterns) lights up the historical streets of the […]